He grew up in the ocean of music

He was not born in a family of musician. He was born in the ocean of music.Ever since his early childhood days, the earliest that he can remember, music, pure Shastriya music, was an essential element of his growing up environment.

Baba, an ardent love of Hindustani Classical music, a connoisseur and also an honorary critic with the All India Radio, ensured the 'purity' of the acoustical 'vatavaran', so much so that his sisters had to really steal moments to listen to Vividh Bharati or Binaca Geetmala.

Every month there would be private 'jalsa' organized at his home, in Lucknow, by Baba and his friends which would sometimes even feature artists like Pandit Ravi Shankar, Pandit V J Jog and Ustad Ahmed Jan Thirakawa.

No wonder even at the tender age of 10 or so, he could prodigiously not just recognize the ragas but relate to them. He had no 'swar-gyan', yet could discern the difference between a Puriya and a Marwa or a Desh and a Tilak Kamod. Born under Shravana nakshtra, he was blessed with the an innate ability for conscious listening with which he would get straight to the essence of the ragas, intuitively, and build relationships with them.

By the time he was in his early teens, maddened by the elixir of the blissful strains of music, the boy was bubbling with the urge to let out and express the music that had by now become his sanctuary. So, one day, sometime in mid-seventies, driven by his explorative nature, he used his amateur carpentry skills and some elementary knowledge of physical acoustics to modify his sister's Hawaiian guitar to create what was the first version of Indra Veena. Despite all the scoldings and wrath of his elders, his joy of having found a vent for his passion was boundless. Very soon, guided by his discerning ears he was able to play Todi and Bihag.

This was the beginning of a new journey. A journey unto exploring the fathomless depths of Hindustani classical music. Shy and diminutive by nature, he had very few friends. Besides studies, which always took priority over music, he was lost in the world of listening to doyens from different gharanas and trying to reproduce the nuances on his self-created instrument, all by himself.In late eighties he got an Indra Veena professionally made and started performing in small private programs. He had no particular regimen for riyaaz. All the time he had for himself, it was meant to be spent in company with music - listening and re-listening, imbibing the essence, trying to reproduce and then listening again. There was a penchance for not getting it right grammatically, but getting it to express itself with all its beauty and 'alankar', in entirety.

He was coaxed into taking lessons for Sangeet Prabhakar and by mid-eighties he had completed it with distinction.

In late, eighties, he had the good fortune of playing for a few concerts at the Festival of India in Switzerland. And immediately thereafter, was blessed with a few months of tutelage at the feet of Pandit Brij Bhushan Kabra in Ahmedabad.Very soon he realized the disconnect. On the one hand his performer self was tugging at the egoic strings to show off and on the other the devotee self was wanting to get drowned and dissolved in the ocean of music, to which he belonged. After spending endless nights of serenading with his first love, in pain and anguish, not able to compromise with his love for the Beloved, he took a call to relinquish the race for performance and settled down to play for himself.Even today, he is never lonely, though he might often be found alone. Al-one with his first love, drowned in the bliss of its sublime experience, in communion with Divinity. 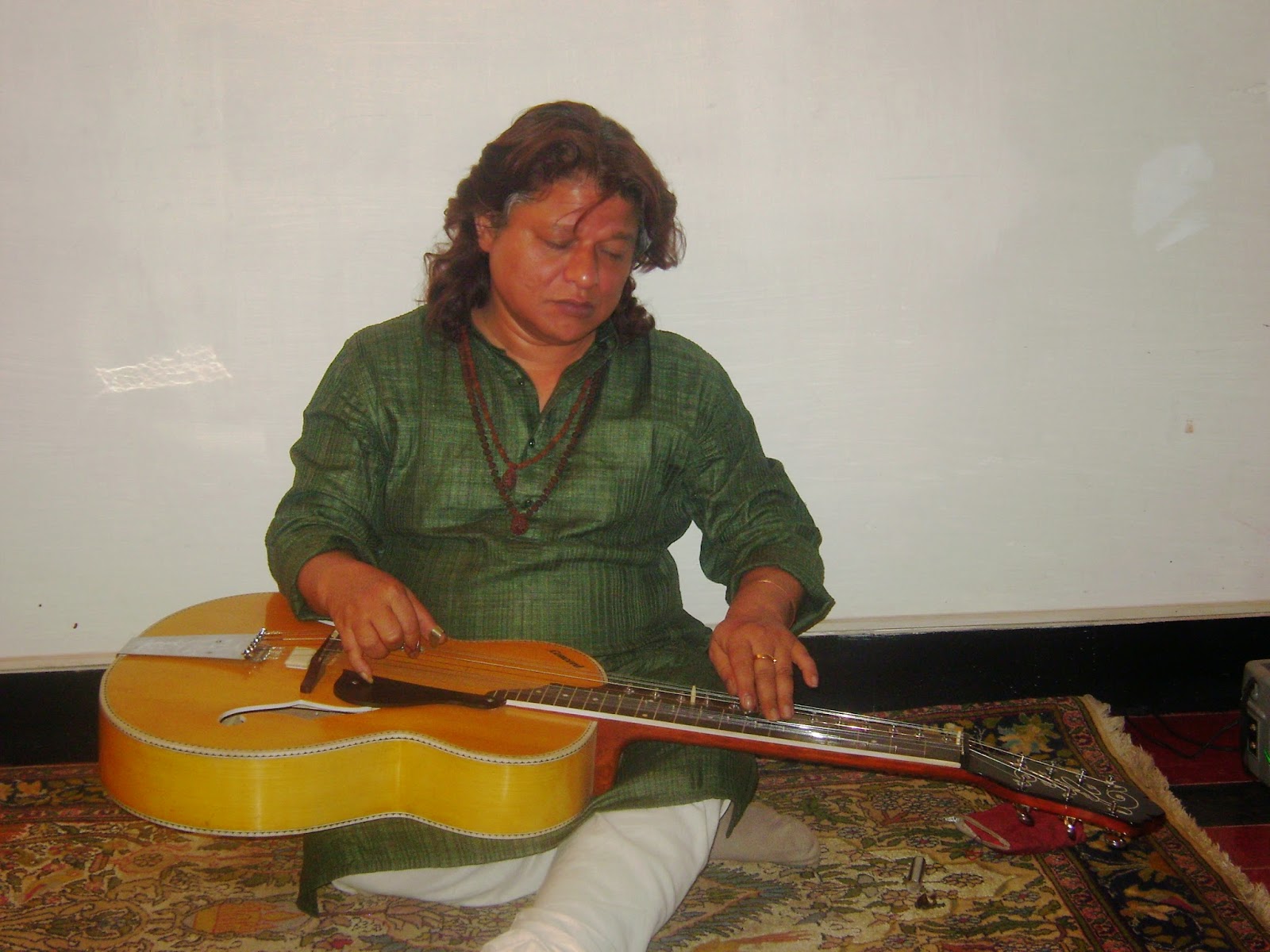 Posted by Indroneil at 9:58 AM No comments: