One of the distinctive features of Hindustani classical music is the time theory of ragas. Each raga is associated with one of the 12 time divisions across a 24-hour cycle called prahar. Not just because of the notes used in the scale but also because of its nature - the pakad and its key notes - the Vadi (king) and Samvadi (queen). Thus, while Bhoopali and Deskar have the same notes in their scale, the former is an performed in the late afternoon or early evening and the later in the late morning. So is it with Marwa and Sohini. While Marwa with the Vadi being Komal Re and the Samvadi being Shuddh Dha, is a Sandhi Prakash raga supposed to be performed during dusk, its close cousin Sohini  with Vadi Dha and Samvadi Ga is is associated with very late night / pre-dawn, the last or eighth period of day, roughly from 3-6AM.

No matter how accomplished an artist is, she is not expected to flout the time theory, and there is a reason. The root of Hindustani music is lies in Nature. The subtle sounds of nature, including the primordial sound of the Universe - Aum - has gone into synthesis of the ragas by the intuitive higher-selves of rishis and munis to ensure that they are, when performed, in perfect harmony with the universal vibrations at all times of the day and across all seasons. Moreover, human beings, as a part of nature also correspond / align to these temporal and seasonal vibrations through certain combinations of the seven chakras - each chakra corresponding to one of the seven notes. 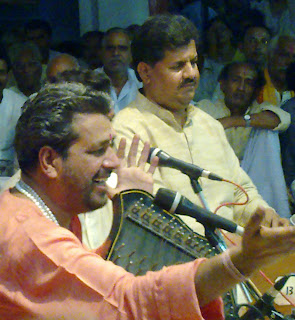 The first principles of dharma are expected to be followed to enable us be in harmony with the spirit of the Universe. And only when one is in perfect harmony with this spirit, the space of awareness in which the soul of music can manifest, gets invoked.

When Pandit Vishwanath decided to sing Raga Marwa late in the night, it was therefore quite a surprise. Despite his mastery and attempts to be honest with the rendition of this rather difficult raga, it was not really gelling well with the overall ambiance - both his inner ambiance as well as the outer ambiance. That's why there seemed to be so much of attempt, so much of effort. A wonderful mellifluous voice that he is gifted with and his ability to connect to the primordial anahat nada came to his advantage to manage to hold the space. If only he had chosen a raga that was more appropriate to the time of  his performance. 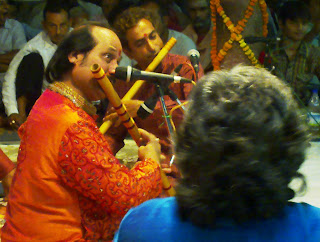 hard-work and conscious effort to build a rapport with the audience. That evening too, in his rendition of Abhogi Kanada - a pentatonic raga that has been adopted from Carnatic music into Hindustani music he was quite industrious, I thought. After a brief meditative alaap where Ronu himself seemed to be communing with the cosmic principle, he, by design, got into performing to the gallery. And that is when he kept wavering from the center, working hard at times and at other times becoming an instrument himself, to regain his spontaneity.

Hindustani music has inherent in it the inter-play of Nava Rasas - the nine emotions. Each raga, depending on its character, has pre-dominance of one or more rasa and a musician is expected to understand and appreciate that during rendition. To me, Abhogi, by its nature, has a tendency to arouse aggression (Krodh) and a wise performer would do well to tone down such forms of presentation which may accentuate that. I wish Ronu had considered this in his gatkari and tankari. He could have focused more on gamaks in the bass octave evoking more serenity than fast tankari in middle and higher octaves which stroked the adrenaline. May be he was trying to feed into the audience's unconscious craving for baser emotions and gather more applaud than on being honest with himself and the raga. Which could have enraptured the audience differently, in a space of expanded consciousness and stirred their soul. May be.  In his rendition of Vaishnav Jana To I heard Ronu coming back to his true, integrated self as his flute 'sang' this ageless bhajan with oodles of devotion and purity, despite the child like play he indulged in with Ram Kumar Mishra on tabla.
Posted by Indroneil at 5:41 AM